This lesson is an exploration into the fundamentals of percussion and musical entrepreneurship. Throughout the next few chapters you will experience live performances, demos and learn more about what it takes to start playing the drums. You will also hear from experts about how to become an entrepreneur, and witness the relationship between the drums and the DJ. Throughout this course you will be challenged to sharpen your listening skills, and develop a deeper understanding for the foundations of music and rhythm. 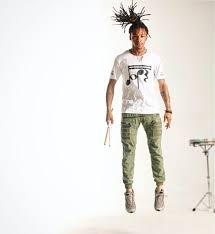 Malik is a Washington, D.C. Native from Uptown Ledroit Park, and Maryland PG County resident. He started playing drums around the age of 5 years old, with inspiration sparked from african drum and dance and later began to take it much more seriously at the age of 12, starting on a 6 piece drum set playing DC “GoGo” music, Hip Hop, and R&B. As Malik continued percussion with ‘’GoGo’’ music, playing in neighborhood bands and generating notoriety for his style of playing, he went to Northwestern High School,  and in his 10th grade year took an interest in the school’s marching band. Joining the marching band changed Malik’s life,  exposing him to a whole new world of percussion. By pursuing marching band in high school he fiercely progressed. While still being in a GoGo band and school band, Malik also had a job here, forcing him to juggle all of these different worlds at once. As he strived to part-take in all this, it resulted in a lack of good school grades, making the process of graduating take longer but at 19 years old he graduated. After completing high school, Malik enrolled in Prince George's Community College and while in school he was blessed with the opportunity to be a part of Howard University's marching band once again exposing him to a more advanced layer of percussion, gaining exposure all across the states. As he advanced in Howard University’s marching band, he struck the internet with his skills as well, landing shares and repost from all over the DMV. As Malik’s rise continued online and in the DMV, he began to form his own brand “D.O.P.E, Definition of Percussion Entertainment. " Established in 2013. At this time Malik shifted away from the Howard University band, taking the experience he gained and leaving the job he had time, he started his D.O.P.E. journey. In the amount of 4 years from 2013 to now, he has participated in street performance all around the DMV, and other major cities as well as New York, California, New Orleans, Virginia Beach, Baltimore, Philadelphia, Boston and more, generating a huge internet presence and going viral several times, gaining him a great following on all social medias. Malik has also performed at multiple festivals such as the “Charged Up” Festival, DC Funk Parade, Broccoli City Festival, Afro Punk, SXSW, A3C, and Made in America. During this time Malik has gained media attention with Time Magazine, Complex Magazine, Fader, Hypebeast, Revolt TV, Circa News, Fox 5 News, WUSA Channel 9 News, ABC Channel 7 News and more. Malik has performed and been scoped by popular, award-winning artists such as Usher Raymond, Wale, Mike Will Made It, Rae Sremmurd, BackYard Band, D.R.A.M, Pusha T and has current working projects with amazing collaborations to come in the near future!
Enroll Free